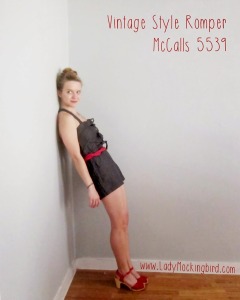 Ok so I know its fall and everything for all you nice people up north.  But down here in the great state of Texas, we are still seeing days that reach ninety… so no, I’m not THAT crazy for posting this make in October.  (okay so I meant to post it earlier this summer but I just procrastinated a bit – jeez)
This McCalls pattern was a junk store find, and one that I just had to actually make (as opposed to letting it sit all lonely-like in the pattern bin).  And if you really want to talk about procrastinating, I actually made it LAST summer. If you remember (and of course you do), it was part of my sewing goals for Spring/Summer 2013!  This little outfit is so much fun to play around in with little sneakers on a super hot day, or dress up with heels for a retro-pin-up look at night to an outside concert or something. Sometimes I put this on and think .. “Is it TOO much?” and then decidedly answer “NO WAY!” and prance out the door to the delight of many compliments and admirers.  🙂 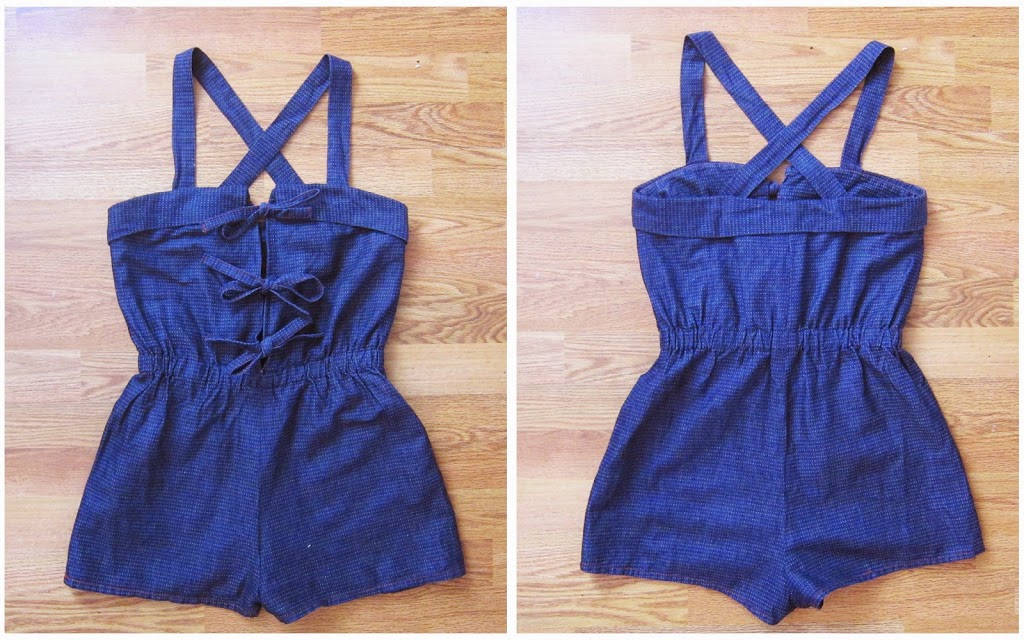 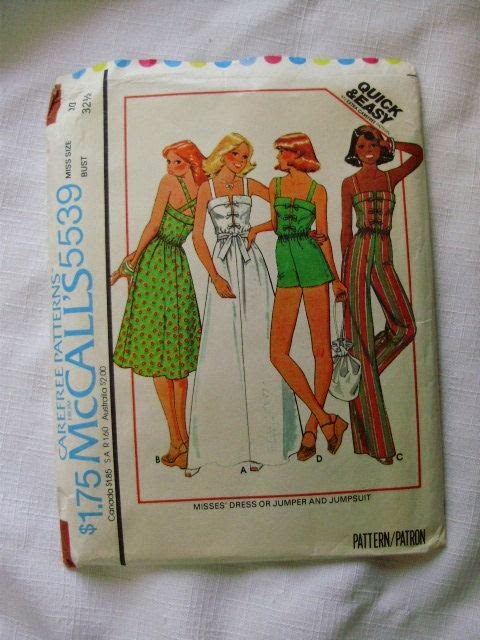 This pattern features an open front with three little tie closures.  It has a 1″ elastic encased in the waistband. There is also a little flap that hangs over the bust line goes around to the back. The crisscross straps button in the back underneath the back flap. I sewed it up in a navy greyish chambray with little white flecks woven into it. It’s the same fabric that I used for my tiny pocket tank – which by the way is extremely difficult to photograph, I mean this thing looks like its three different colors here!  I also made this pattern in a vintage floral (what I had left from my low back dress) for my dear friend Brynn for her birthday – which is three days after mine.  (I swiped a pic of it from her Facebook below) Because only the best of friends have matching birthday rompers. 🙂 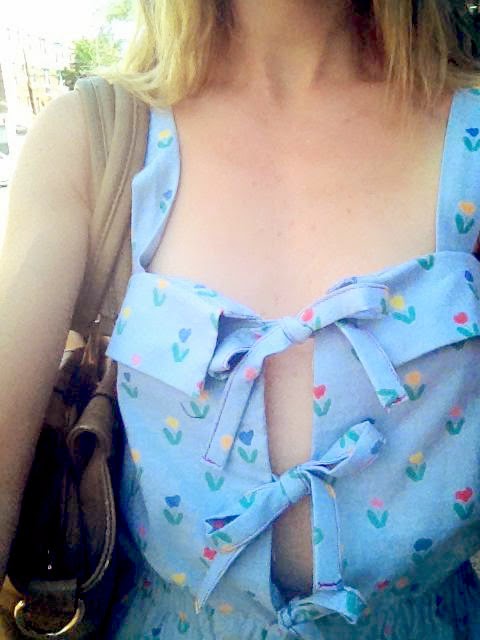 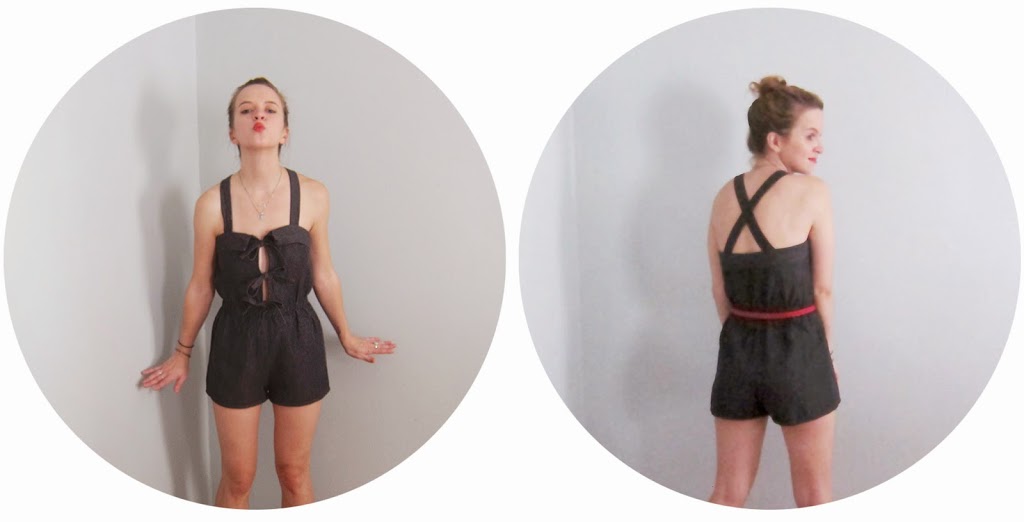 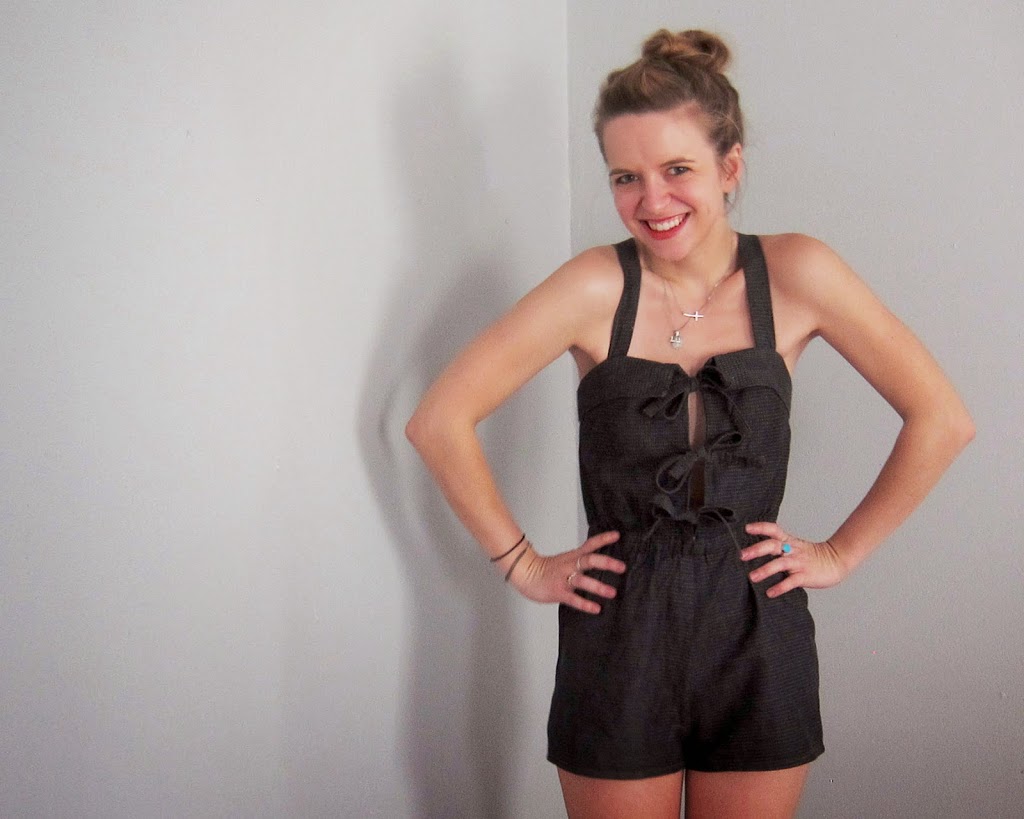 My only problem with this pattern is that it has no pockets.  I have no idea how I allow this major oversight to happen.  I’m actually considering going back and adding some patch pockets with a little bit of fabric that I have left. Until then I guess I will be that girl who is awkwardly rubbing her hands on her hips thinking that she has pockets where there are none.  As far as adjustments go, I did take in the side seems a significant amount and also shortened the rise about 1″.

To add a very subtle pop to the neutral fabric I finished the seams in red serger thread which I also used for the hem and to made the front ties. There are also little red buttons hiding under the back flap to secure the straps in place. 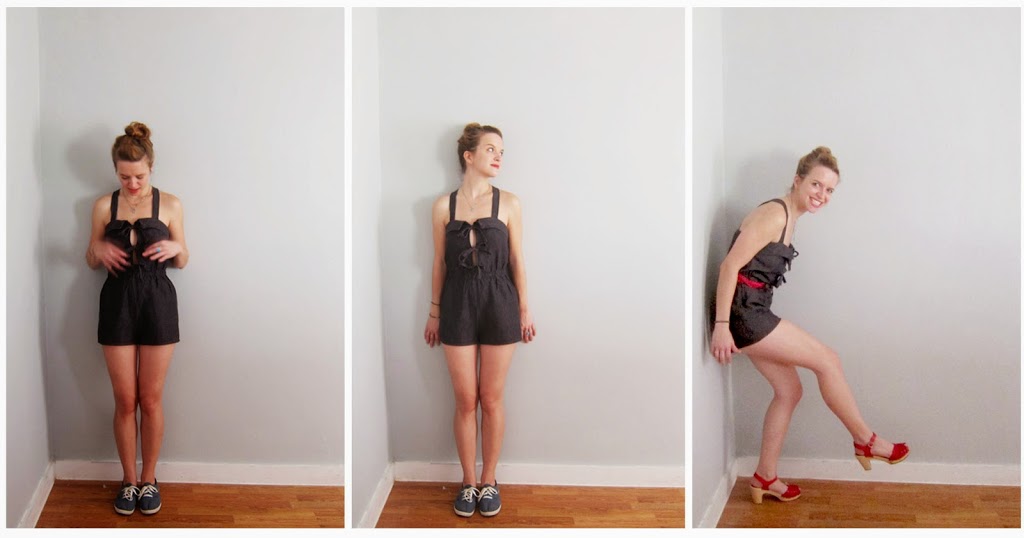 Pattern:   McCalls 5539 view D
Fabric:   White flecked Navy/Grey Chambray
Notions:   Two small red buttons, elastic waistband
Difficulty:  Intermediate
Adjustments:  Took in side seams A LOT (probably about 4 inches), took up rise 1″
Finishes:  Serged seams in contrast thread, turned hem in contrast thread, neckline facing
Sew it again?   Probably not, only because this isn’t exactly a “staple piece” – I mean, how many skimpy vintage rompers does a girl really need in her wardrobe?  I do have the tea-lenght skirted version in my sewing to-do list so I guess we shall see!
Happy Sewing!

Just a few blissful moments working from my happy

Any guesses on the inspo for the pocket stitching

THIS WEEK IN THE STUDIO ✨ Continuing this seri

Another date night reel for you 🥰 This one fea